The Most Popular Wedding Movies of All Time

Who doesn’t love a rom com? Guilty pleasure for some and the go-to genre for others, a good romantic comedy is hard to resist.

Over the past 50 years or so, we’ve been treated to some truly iconic romantic comedies. And while there are lots of different rom coms out there, many share a similar recurring trope: weddings.

From Four Weddings and A Funeral to The Wedding Planner, it seems rom com fans can’t get enough of a good wedding. The question is: which are the most popular wedding movies of all time?

To find out, we gathered data on 100 films in which weddings play a prominent role, including rom coms, dramas, and comedies. This not only provided great insight into the world’s favourite wedding movies, but also the typical tropes that make them such an enjoyable watch.

So, if you love a bit of schmaltz or prefer watching nuptials go awry, join us as we explore the world’s most popular wedding movies of all time.

The 10 Best Wedding Movies of All Time

Weddings have long been given the Hollywood treatment, acting as both a vehicle for laughs and an opportunity for some hard-hitting romance. But which are our favourite wedding-related flicks? Let’s find out. 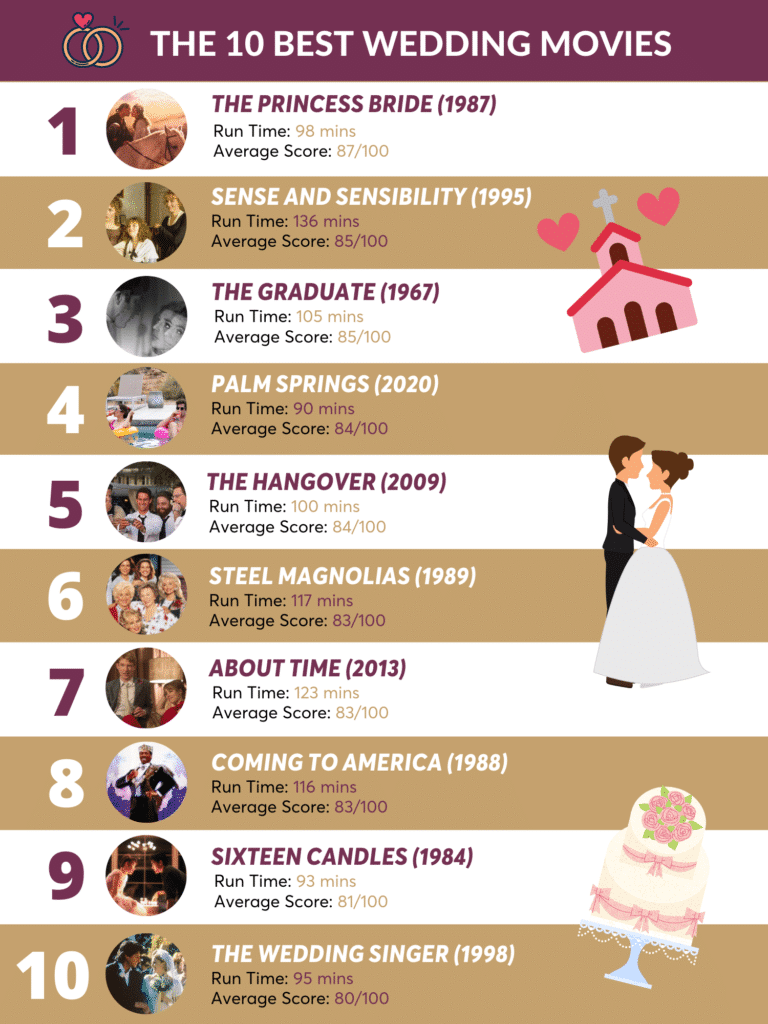 It’s perhaps unsurprising that The Princess Bride clinched the top spot as the world’s favourite marriage movie. With iconic characters and big laughs, the 1987 cult hit appears in the American Film Institute’s 100 Greatest Film Love Stories, and came a respectable 46th in Channel 4’s list of the 50 Greatest Comedies of All Time.

Speaking of comedies, they performed well overall, with films like The Hangover and The Wedding Singer beating more bona fide romantic dramas to the top of the pile. That said, it does seem that the world can get on board with a bit of soppiness, with iconic tear-jerker romances like Sense and Sensibility appearing in the top 5.

From our top-10 list, it could be argued that a decent wedding flick is a dying art. 70% of the films to appear in the shortlist were made pre-2000s, suggesting that wedding-related rom coms hit their zenith in the 1990s.

The 10 Worst Wedding Movies of All Time

Of course, like any film genre, you need to take the good with the bad, and wedding movies are no exception. In fact, as bad films go, there are some real stinkers in the marriage movie arena – as our top 10 demonstrates. 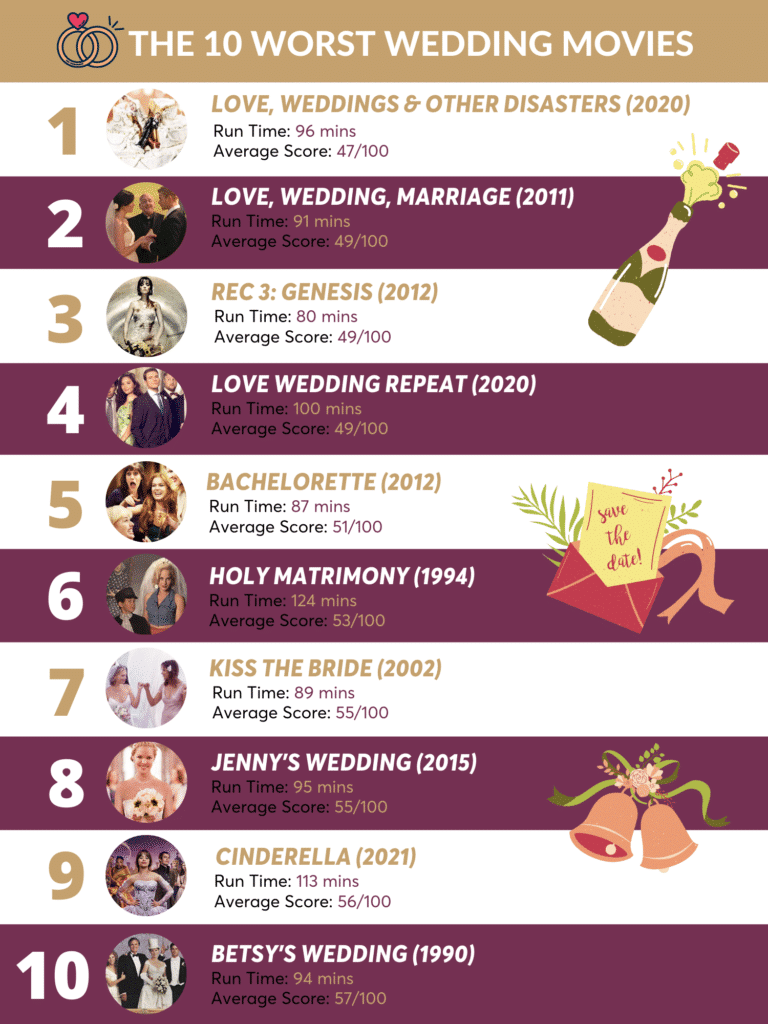 If you’re sat thinking “I haven’t heard of most of these”, trust us, you’re not missing out. From our research, these Razzie-worthy flicks ranked bottom of the pile, primarily because they take corny wedding romance to a whole new level – and not in a good way.

Let’s start with the worst-ranked wedding film of all time, Love, Weddings & Other Disasters. With a 3% rating on Rotten Tomatoes, this 2020 rom com was never destined to become a classic. And that’s despite featuring some proper actors, including Diane Keaton, Jeremy Irons, and Maggie Grace – yikes.

Elsewhere, films like Jenny’s Wedding (starring Katherine Heigl) and Love Wedding Repeat (starring Sam Claflin and Olivia Munn) offered further proof that it takes more than big-name actors to make a decent wedding flick. And while [REC]3 certainly offered a different take on the classic wedding story, it too was left battered and bruised by Rotten Tomatoes, with a very average score of 42%.

What’s more, it’s worth pointing out that 80% of films in the worst-rated list were made in the 2000s, including the entire top 5. Only Holy Matrimony (1994) and Betsy’s Wedding (1990) came from the last century, supporting our theory about the 1990s being the best decade for wedding movies.

How Do Our Wedding Movie Preferences Change by Region?

It’s safe to say that the UK is a nation of rom com fans, with films like Love Actually and Emma being among our favourite romantic flicks. But when it comes to wedding movies specifically, how do our tastes differ around the country?

To find out how your fellow Brits’ wedding film tastes differ from your own, explore our interactive map below…

Looking at our map, one thing’s for certain: we Brits really like Love Actually, Mamma Mia!, and Cinderella. These three films were way out in front of the likes of Bridesmaids, About Time, and The Hangover, accruing tens of thousands of monthly searches between them in all regions of the UK.

Although wedding movie preferences were relatively similar around the country, some interesting discoveries emerge when you look closely at the data. For example, Mamma Mia! was far and away the most popular marriage movie in northern England, suggesting that northerners can’t get enough of the film’s musical romance and spectacular Mediterranean setting.

Meanwhile, in London, searches for Coming to America were higher than in any other UK region, with the iconic 1988 rom com being among the most-searched films in the capital. London also stood out as the only region where Corpse Bride didn’t appear in the top 5 most-searched wedding films, suggesting that Londoners prefer real-life romance over animated.

Elsewhere, it’s worth pointing out that while Cinderella was one of the most-searched films across the UK, it also featured on our worst wedding movies list, with a paltry score of 56/100. So, either we Brits love a dodgy live-action remake or are still searching for the original; we like to think the latter is true.

What Are the Most Used Plot Points in Wedding Movies?

It’s fair to say that wedding movies, like other rom coms, attract their fair share of movie cliches. Indeed, you need only watch a few of the films mentioned in this article to notice a few recurring tropes and plot devices.

The question is, which plot points are most commonly used in wedding movies? Let’s take a look.

So, from fairy-tale dresses to jilts at the altar, wedding movies lean on a fair few plot devices to encourage a laugh or instil a little heartbreak. Sit down to watch any of the films featured in our best and worst shortlists, and you’ll find the same tropes repeated over and over again – with some films disguising their unoriginality better than others.

We can only hope our own weddings are a touch more successful!

How We Did It

Keen to learn more about how we came up with our stats? Find out how we did it below.

We aggregated scores from IMDB, Rotten Tomatoes and Google to see which movie was the best of all. We also looked at run time to see how long each movie was.

Google keyword data was then used to see what the most popular streamed wedding movies were over the past 12 months in every region of the UK.

We analysed each movie in our list of 100 movies and compared the common storyline traits to see what the classic wedding movie formula consisted of.

So, what do you think? Do you agree with our lists or feel like shouting at your screen? We’d love to hear your take, so get in touch on The Mere Facebook page.

Wedding movies may typically be full of disasters and heartbreak, but we can almost guarantee that your wedding at The Mere won’t be. If you’re interested in celebrating your marriage at one of the north west’s best-loved wedding venues, click here to browse our packages or get in touch on 01565 830155.