If you’re a regular on the fairway, you’ll know just how competitive the realm of handicaps can be. But while competing with friends, family and colleagues is one thing, how does your handicap compare to famous faces who enjoy hitting the green in their spare time?

To find out, we’re taking a look at a selection of celebrity golfers and their handicaps, so you can benchmark your own performance against golfers from the worlds of TV, film, music, and sport.

So, what are you waiting for? Put your golfing ego on the line and see how you compare to some of the best celebrity golfers in the UK.

As you might have guessed, some of the UK’s best celebrity golfers happen to be former or current sports stars – here to make us mere mortals feel less than adequate once again. Find out how your handicap stacks up against a few famous sports personalities below.

Tim Henman may never have bagged a tennis grand slam, but he’s made up for it with a lucrative media career and some stellar golfing. Since hanging up his sweatbands, the 47-year-old former tennis pro has swapped Slazenger for Ping, proving himself a wizard of the fairway with an impressive #2 handicap.

When not showing off his pearly whites as a pundit on Sky Sports, Jamie Redknapp is a frequent fixture on the fairways of London, Surrey, and Essex. Admitting his “addiction” to golf as part of a Sky Sports interview, the former Liverpool and Tottenham midfielder has certainly played a hole or two in his time, gaining a #4 handicap and playing on some of the world’s best courses, including Pebble Beach, California. 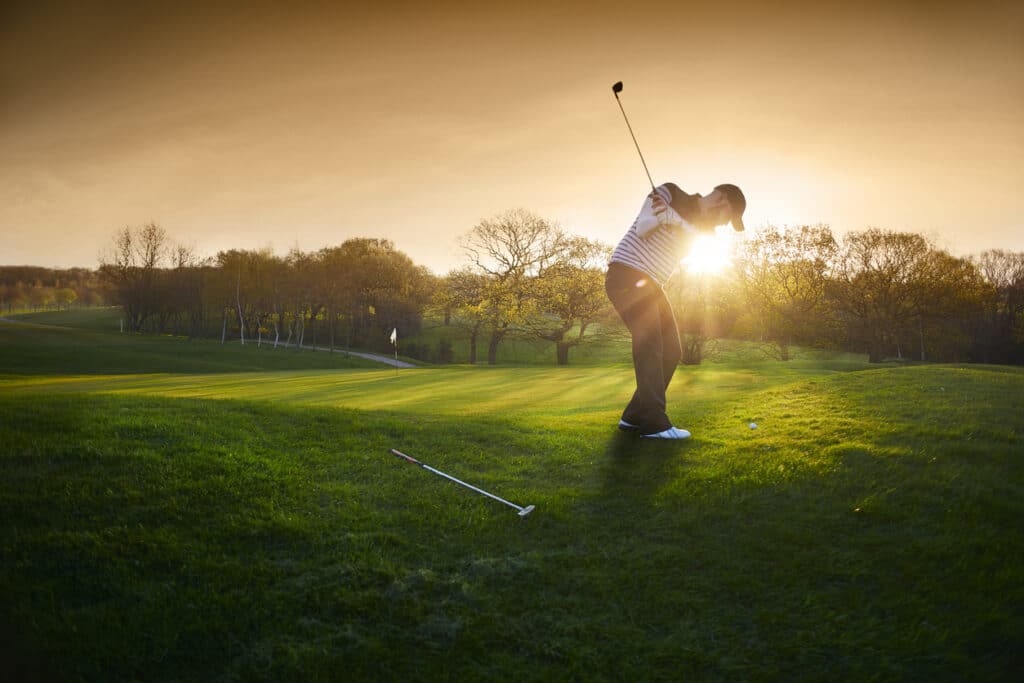 It has to be said that Alan Shearer is a jack of all trades when it comes to sport. Not content with being the Premier League’s record all-time goal scorer, Newcastle’s favourite son has spent his post-football years acing his swing action. A devoted golf lover, Shearer has achieved a #6 handicap, proving himself to be one of the UK’s best ball strikers in more ways than one.

The Ashes, an award-winning winery, a seat in the House of Lords, and a #9 handicap – Ian Botham is a busy guy. Making his name as one of the greatest all-round cricketers in history, Botham has enjoyed a whole range of other pursuits since hanging up his test whites, with golf being one of his best-loved passions. Did we mention he’s recently become the UK’s Trade Envoy to Australia? We don’t know how he keeps up.

Hollywood has no shortage of amateur golfers, with several stars of the big screen known to grab a quick 18 when they get the chance. So, if you’ve ever wondered how your handicap compares to the likes of Hugh Grant and Dennis Quaid, you’re about to find out.

When he’s not pretending to save the world, playing music, or supporting his favourite baseball team, the Houston Astros, Dennis Quaid can be found flexing his golfing skills on any one of LA’s majestic courses. The Hollywood legend, now in his late sixties, is known to be one of the movie world’s best golfers, having achieved a scratch handicap at one point in his long career – impressive stuff. 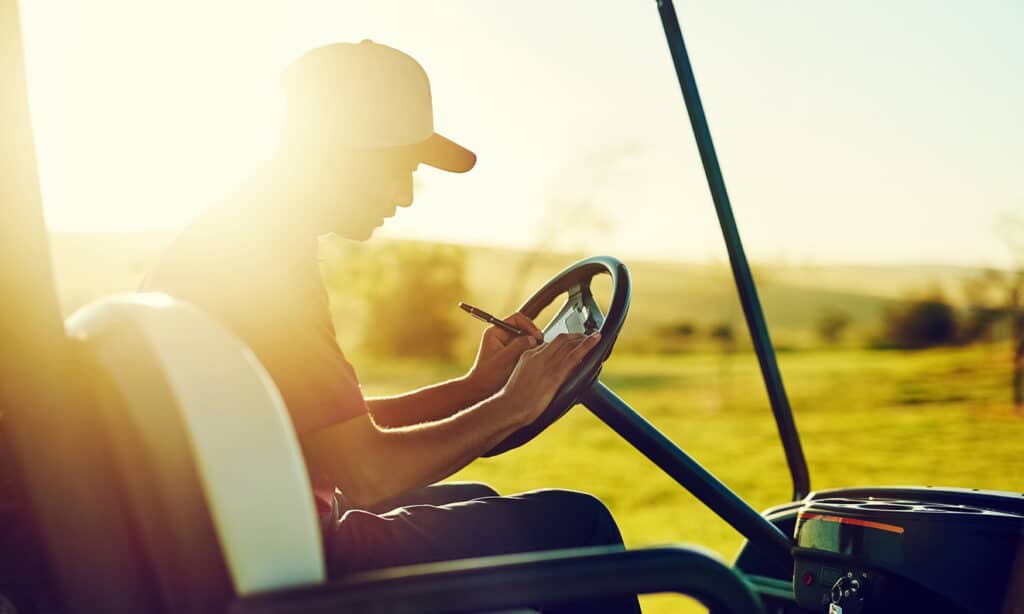 Having played with the likes of Tiger Woods, Samuel L Jackson is no stranger to a tee off. Describing golf as “the perfect game”, Jackson can often be seen practising his drive at California’s esteemed fairways. Having maintained a #7 handicap for much of his adult life, Jackson has used his semi-retirement to get that down to a #5 – not bad for someone who’s been in over 140 feature films.

Hugh Grant may have made a career out of very British self-deprecation in the likes of Four Weddings and a Funeral and Notting Hill, but there’s no hiding his gift for golf. With a #7 handicap, Grant has teed off at several major pro-am championships in his time, including Dunhill Links, and maintains a membership at one of the UK’s premier golfing establishments, Surrey’s Queenwood Club.

If it feels like you haven’t seen Matthew McConaughey in many films recently, it’s probably because he’s too busy playing golf. Indeed, rumour has it the famous star owes much to the game of golf, having picked up his breakthrough role in Dazed and Confused while boasting about his swing in Austin’s Hyatt Hotel. Since then, McConaughey has played some iconic roles and still found time to maintain a #8 handicap.

Proving that golf is for everyone, there are hundreds of well-known personalities from the world of music, TV and entertainment that can’t resist playing a hole or two in their spare time. Here are a few examples whose handicaps we think you’ll be interested to hear.

If Anton du Beke’s Viennese Waltz wasn’t impressive enough, you should see him swing a sand wedge. The Strictly Come Dancing star is no stranger to a set of golf clubs, having achieved a #5 handicap during his tenure as an amateur golfer. And that’s not all – did you know du Beke was once a county championship footballer? Quite the sporting polymath! 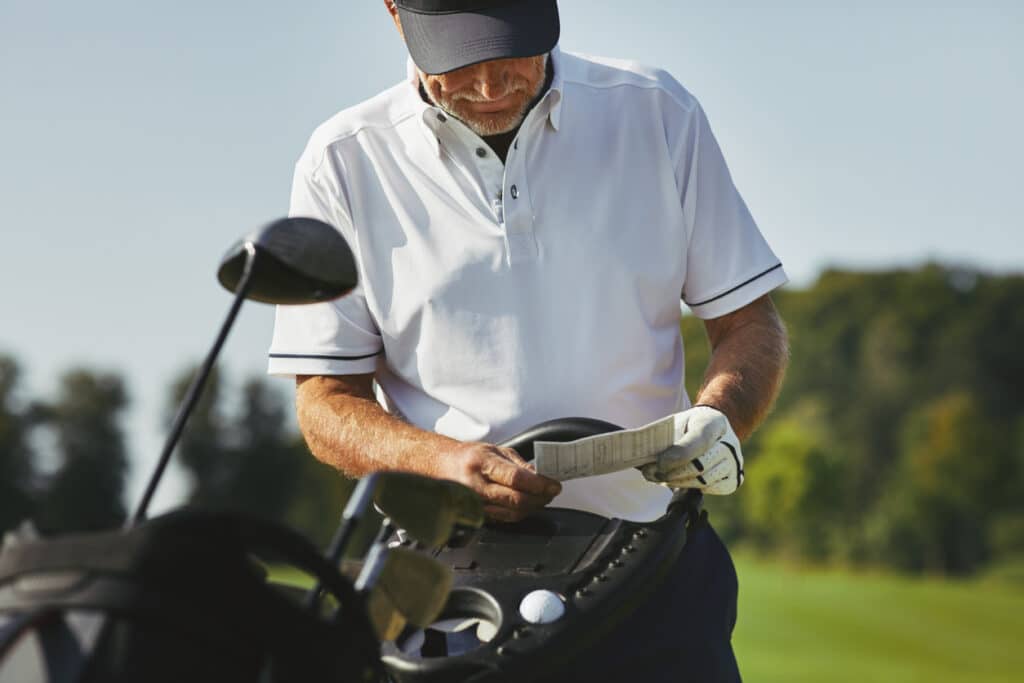 Cinema’s go-to hardman, Vinnie Jones, may not look like your typical golfer, but his better-than-average #8 handicap says otherwise. After making his name as a defender for Wimbledon, Jones turned his attention to acting, later picking up a set of clubs to stare down the competition as an amateur golfer. And, as it turns out, he was pretty good at it, maintaining a sub-10 handicap for much of his playing career.

It may surprise some to learn that beloved BBC Breakfast host, Naga Munchetty, is a dab hand on the fairway, maintaining a very respectful #8 handicap. Munchetty says she first took up golf in 2008, and that it appeals to her highly competitive sporting nature.

For a young golfer, Niall Horan has already achieved a respectable #14 handicap, something which is sure to annoy our older readers out there. And if that wasn’t enough, The One Direction star has played in some of the world’s premier pro-am tournaments, facing off against the best in the business. Don’t forget, though, that he is Irish, and owing to the fact that the Emerald Isle is home to some of Europe’s best courses, it all starts to make sense.

So, there you have it, 12 famous golfers and their annoyingly good handicaps. Feeling a little put-out and keen to improve your own handicap rating? Why not pay our award-winning golf course a visit and practice your swing on one of the north west’s premier fairways? For more information or to book your session, visit The Mere website or call us on 01565 830155.